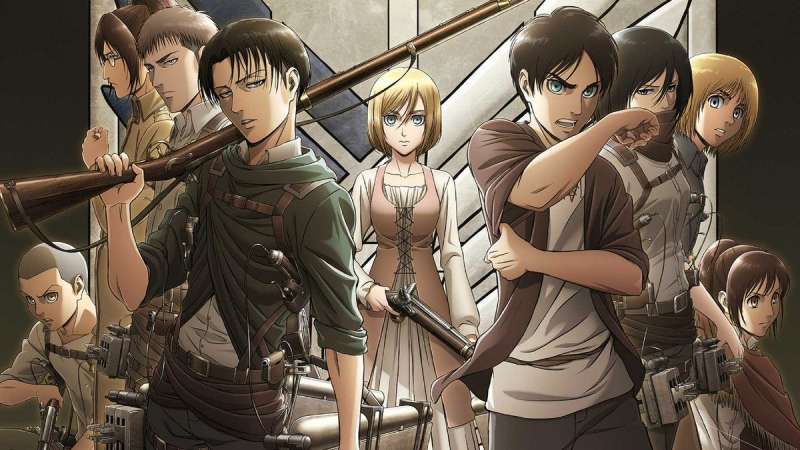 Attack On Titan Quotes That Will Inspire Greatness

1. “I can do this. No, we can do this! Because we’ve all been special since the day we were born. We’re free!” – Eren Jaeger

2. “Nothing can suppress a human’s curiosity.” – Eren Jaeger

3. “What is the point if those with the means and power do not fight?” – Eren Jaeger

4. “I don’t have time to worry if it’s right or wrong, you can’t hope for a horror story with a happy ending.” – Eren Jaeger

6. “I want to see and understand the world outside. I don’t want to die inside these walls without knowing what’s out there.” – Eren Jaeger

7. “If you think reality is just living comfortably and following your own whims, can you seriously dare to call yourself a soldier?” – Eren Jaeger

8. “No matter how messed up things get, you can always figure out the best solution.” – Eren Jaeger

10. “What are you going to do if the ones with the strength don’t fight for you?” – Eren Jaeger

11. “There’s no time to figure out if this the right thing to do! Just move… Don’t try to keep your hands clean. That’s right, the world is cruel.” – Eren Jaeger

14. “From the day we are born we are free… It doesn’t matter how strong those who deny us that freedom are.” – Eren Jaeger

15. “When people are faced with a situation they don’t understand, it’s easy for fear to take hold.” – Armin Arlert

16. “To defeat a monster, you must be willing to throw aside your humanity and all that makes you human.” – Armin Arlert

18. “People are crazy for believing that these walls will protect us forever. Even though the walls have been intact for the past 100 years, there’s nothing that can guarantee they won’t be broken down today.” – Armin Arlert

19. “You’re only resorting to physical abuse because you can’t prove that I’m wrong.” – Armin Arlert

21. “To surpass monsters, you must be willing to abandon your humanity.” – Armin Arlert

22. “Someone who can’t sacrifice anything, can’t ever change anything.” – Armin Arlert

25. “Everyone can make a choice after they have learned what it will result in. It is so easy to say we should have done it this way afterwards. But you can’t know what your choice will result in before actually choosing.” – Armin Arlert

26. “After the fact, it is easy to say, “We should have done something else.” But no one knows how things will turn out.” – Armin Arlert

27. “If there’s anyone who can bring change, it will be someone willing to sacrifice what they care for.” – Armin Arlert

28. “The people who have the ability to change something in this world, all, without exception, have the guts to abandon things important to them if they have to.” – Armin Arlert

31. “Only victors are allowed to live. This world is merciless like that.” – Mikasa Ackerman

32. “Believe in your own power.” – Mikasa Ackerman

33. “That’s right… This world… is cruel. It hit me that living was like a miracle.” – Mikasa Ackerman

35. “You don’t stand a single chance to win unless you fight.” – Mikasa Ackerman

36. “If you think it’s natural for people to sacrifice their own lives to save others, surely you understand that sometimes a single death can save many lives.” – Mikasa Ackerman

37. “I don’t know which option you should choose. I could never advise you on that… No matter what kind of wisdom dictates the option you pick, no one will be able to tell if it’s right or wrong until you arrive to some sort of outcome from your choice.” – Levi Ackerman

38. “The difference between your decision and ours is experience. But you don’t have to rely on that. Choose… Believe in yourself, or believe in the survey corps and me. I don’t know… I never have. I can believe in my own abilities or the choices of the companions I trust. But no one ever knows how it will turn out. So choose for yourself, whichever decision you will regret the least.” – Levi Ackerman

39. “A lot of the time, you’re going into a situation you know nothing about. So what you need is to be quick to act… And make tough decisions in worst-case scenarios.” – Levi Ackerman

40. “The lesson you need to learn right now can’t be taught with words, only with action.” – Levi Ackerman

41. “The only thing we’re allowed to do is believe that we won’t regret the choice we made.” – Levi Ackerman

42. “I think pain is the best discipline.” – Levi Ackerman

43. “It’s good to see that someone has the balls to go. But don’t forget to do your damnedest to stay alive.” – Levi Ackerman

45. “This is just my opinion, but when it comes to teaching somebody discipline… I believe pain is the most effective way.” – Levi Ackerman

46. “If we only focus on making the best moves, we will never get the better of our opponent. When necessary, we must be willing to take big risks, and be prepared to lose everything. Unless we change how we fight, we cannot win.” – Erwin Smith

47. “If you begin to regret, you’ll dull your future decisions and let others make your choices for you. All that’s left for you then is to die. Nobody can foretell the outcome. Each decision you make holds meaning only by affecting your next decision.” – Erwin Smith

48. “When necessary, we must be willing to take big risks, and be prepared to lose everything.” – Erwin Smith

49. “It’s us who gives meaning to our comrades lives.” – Erwin Smith

51. “If there’s something you don’t understand, learn to understand it. It’s well worth any risk to our lives.” – Hange Zoe

53. “Even in moments of the deepest despair… I guess we can still find hope, huh?” – Hange Zoe

54. “Instead of scampering around like a scared little mouse your whole life, wouldn’t you rather face up to your enemy, even if it means risking your life?” – Hange Zoe

56. “Living this way is my way of getting revenge. I’m going to be living proof that your fate isn’t decided at birth!” – Ymir Fritz

57. “Do you always want to live hiding behind the mask you put up for the sake of others? You’re you, and there’s nothing wrong with that.” – Ymir Fritz

58. “You’re going to kill yourself. The ultimate act of submission. Is that how much you want to please the people who treated you like a nuisance? Why are you trying to hurt yourself? If your will is that strong then shouldn’t you be able to change your fate?” – Ymir Fritz

59. “You gonna care what other people think and be someone you’re not your whole life?” – Ymir Fritz

60. “The future of humanity will be doomed. Having said that, I’m not about to sit around while we all get slaughtered.” – Jean Kirstein

61. “Right now we’ve got no choice but to try. We gotta believe there’s a way to beat him!” – Jean Kirstein

63. “Only when a person stops fighting have they lost.” – Miche

64. “The only truth on this world is that there is no truth. Anyone can become a god or a devil. All it takes is for people to believe it.” – Eren Kruger

65. “Everyone had to be drunk on somethin’ to keep pushing on… Everyone was a slave to somethin’.” – Kenny Ackerman

66. “Do you want to know why most people live and die without accomplishing a single damn thing? It’s because they’ve lost their imaginations. They’ll complacently waste their entire lives unashamed of the fact that all they’ll ever add to the world is shit. Such people are little more than cattle. They can’t even comprehend greatness, not even when it’s right in front of them.” – Keith Shadis

67. “Our actions right now will affect the lives of hundreds of thousands of people! What’s more important? That, or getting lost in some sort of ridiculous delusion?” – Reiner

68. “I don’t know what’s right anymore but I do know that I have to face the consequences of my actions and carry out my duty as a warrior to the end.” – Reiner

69. “Going against the flow… takes a lot of courage. I respect that. Maybe people who can do it are just stupid, but… Well… What I’m sure of is that people like that are rare.” – Annie Leonhart

70. “We need to stop living for others. From now on… Let’s live for ourselves!” – Historia Reiss